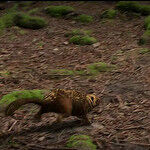 Castorocauda was a genus of small, semi-aquatic mammal relative that lived in the Jurassic period, around 164 million years ago, found in lakebed sediments of the Daohugou Beds of Inner Mongolia. It contains the single species Castorocauda lutrasimilis. They were highly specialized, with adaptations evolved convergently with those of modern semi-aquatic mammals such as beavers, otters, and platypus.

Castorocauda lutrasimilis was a member of the order Docodonta, which was a wholly extinct group of Mammaliaformes. It is not considered to be a mammal by the crown group definition, which takes the mammals to be the group containing the most recent common ancestor of all living mammals (the monotremes, placentals, and marsupials) and its descendants. Many writers, however, do not define Mammalia as a crown group; Kielan-Jaworowska et al. (2004), for example, defines Mammalia as the group originating with the last common ancestor of Sinoconodon and living mammals, a definition that includes Docodonta.

An important goal of paleontologists is to track the origin and evolution of certain characteristics. Hard anatomy characters such as teeth and bones preserve well in the fossil record and are the main source of information about how fossil animals are related to their modern counterparts. Soft anatomy features such as internal organs do not preserve so well.

A Castorocauda fossil was discovered in 2004 in the fossil-rich beds of Liaoning province, China; it was reported in the journal Science by an international team led by Qiang Ji of Nanjing University. The fossil was so well preserved that an important feature of its soft anatomy — hair — was preserved. Hair is present in all modern mammals and is therefore assumed, under principles of maximum parsimony, to have been present in all descendants of the last common ancestor of Castorocauda and today's mammals, including crown mammals and other docodonts. The hair appears to have been a very advanced dense pelage including guard hairs and underfur.

Among docodonts, Castorocauda appears to have been related to Krusatodon and Simpsonodon, both European animals. This may be evidence that Europe and Asia underwent a faunal interchange in the Middle Jurassic. The two continents would later be separated by the Turgai Strait.

Two Guanlongs chase a Castorocauda through a forest. The Castorocauda escapes into a log and sprays the Guanlongs with a skunk-like spray from a tail gland.

Retrieved from "https://dinosaurrevolution.fandom.com/wiki/Castorocauda?oldid=24848"
Community content is available under CC-BY-SA unless otherwise noted.