Cryolophosaurus apears in the first episode of dinosaur revolution . They are among the first non-avian dinosaurs found to live in Antarctica. They were about 6.5-8 m long. They weighed about 800kg and ranged from 194-188 mya in the early Jurassic.

The holotype FMNH PR1821 is the only fully described specimen of Cryolophosaurus. The specimen consists of an incomplete skull and mandibles lacking most of their front half; nine maxillary teeth; a fragmentary sixth cervical body part; cervical vertebrae 7-10; several posterior cervical ribs; several anterior dorsal vertebrae; most mid and posterior dorsal vertebrae; several dorsal ribs; the fifth sacral vertebrae; three chevrons; many partial and complete caudal vertebrae and centra; two partial humeri; a proximal radius; a proximal ulna; a partial ilium; a proximal pubis; both ischia, but only one distal; two incomplete femora; the distal end of a tibia; the distal end of a fibula, and the astragalus and calcaneum. In 2013, new material of Cryolophosaurus was unearthed in Antarctica. The description of this material has not yet been published in a non-abstract form.

Cryolophosaurus was a large, well-built theropod, one of the largest of its time. The genus has been described by Roger Benson and colleagues (2012) as a top predator in Antarctica. It had slender proportions.[3] Cryolophosaurus was estimated as being 6 to 7 m (19.7 to 23.0 ft) in length by William R. Hammer & William J. Hickerson (1998). A 2007 study by Nathan Smith et al. revised the length to 6.5 m (21.3 ft). Its weight estimated at 465 kilograms (1,025 lb).[1][4] Based on these length and weight estimates, Cryolophosaurus is currently the largest known Early Jurassic theropod.[3][5] Smith et al. (2007b) and Benson et al. (2012) noted that the holotype individual probably represents a sub-adult, so adults could have been larger.

The holotype of Cryolophosaurus consists of a high, narrow skull, which was discovered articulated with the rest of the skeleton. The skull is an estimated 65 centimetres (26 in) long. It has a peculiar nasal crest that runs just over the eyes, where it rises up perpendicular to the skull and fans out. It is thin and highly furrowed, giving it a Spanish comb-like appearance. The crest is an extension of the skull bones, near the tear ducts, fused on either side to orbital horns which rise from the eye sockets. While other theropods like the Monolophosaurus have crests, they usually run along the skull instead of across it.

An unpublished study conducted by Vernon Meidlinger-Chin in 2013 suggested that previous studies lacked focus on endocranial details. The study found that the Cryolophosaurus fossil has a nearly complete, undistorted cranial cavity which is complete enough to give an approximate shape and size of the living brain. The endocast features clarified the dissimilarity of the skull with those of Allosauroids and Coelurosaurs giving Cryolophosaurus a basal position in Theropoda.

Cryolophosaurus originally was collected during the 1990–91 austral summer on Mount Kirkpatrick in the Beardmore Glacier region of the Transantarctic Mountains. The discovery was made by Hammer, a professor atAugustana College, and his team. The fossils were found in the siliceous siltstone of the Hanson Formation, formerly the upper Falla Formation, and dated to the Pliensbachian stage of the early Jurassic. Cryolophosaurus was the second dinosaur, and first theropod, to be discovered in Antarctica. It was discovered after Antarctopelta, but named earlier.

In 1991, both Hammer and the Ohio State University geologist David Elliot excavated separate outcroppings near Beardmore Glacier, sharing logistical expenses. Elliot's team first came across the remains of Cryolophosaurus in a rock formation around the altitude of 4,000 m (13,000 ft) high and about 640 km (400 mi) from the South Pole. When the discovery was made, they soon notified Hammer. Over the next three weeks, Hammer excavated 2,300 kg (5,100 lb) of fossil-bearing rock. The team recovered over 100 fossil bones, including those of Cryolophosaurus. The specimens were formally named and described in 1994 by Hammer and Hickerson, in the journal Science.

During the 2003 season, a field team returned and collected more material from the original site. A second locality was discovered about 30 metres (98 ft) higher in the section on Mt. Kirkpatrick.

The name Cryolophosaurus ellioti is derived from the Greek words κρυος (meaning 'cold' or 'frozen', in reference to its discovery in Antarctica), λοφος (meaning 'crest') and σαυρος (meaning 'lizard'), thus "cold crest lizard". Hammer and Hickerson named the species C. ellioti, after David Elliot, who had made the initial discovery of the fossils.

The show first featured a female Cryolophosaurus with her eggs, later coming with her mate, the smaller male, but another male arrived and blushed - but the resident male didn't like this, and they fought. The rival male kicked the first male down and jumped onto the first male. This action is similar to Charles R. Knight's famous painting Leaping Laelaps. He tore off the pair of crests, winning the battle, however the defeated male survives. The second male then threw the smaller male’s crests onto the ground before breaking the eggs open and leaving the nest with the female following him.

Animation with Cryolophosaurus in it 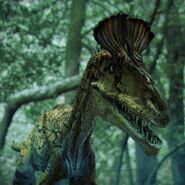