Eoraptor are small dinosaurs that lived during the Triassic.

Eoraptor had a slender body that grew to about 1 meter (3 ft) in length, with an estimated weight of about 10 kilograms (22 lb). It has a lightly built skull with a slightly enlarged external naris. Like the coelophysoids which would appear millions of years later, Eoraptor has a kink in its upper jaws, between the maxilla and the premaxilla. Sereno et al. (2013) observed that the lower jaw has a mid-mandibular joint. It ran digitigrade, and upright on its hind legs. The femur of the holotype specimen PVSJ 512 of Eoraptor is 152 mm, and the tibia is 157 mm, suggesting that it was a fast runner. Its forelimbs are only half the length of its hindlimbs, which would suggest that it was an obligate biped. All of its long bones have hollow shafts. Eoraptor had five digits on each 'hand', the three longest of which ended in large claws and were presumably used to handle prey. Scientists have surmised that the fourth and fifth digits were too tiny to be of any use in hunting. The ilium is supported by three sacral vertebrae, unlike that of the coeval Herrerasaurus which is supported by only two sacrals, a basal trait. Eoraptor had vertebral centra that are hollow, a feature present in some of its ancestors.

Bonaparte (1996) interpreted the relatively large orbital opening in the skull as a juvenile trait. Tykoski agreed (2005) and suggested that certain skull features of the type specimen suggested that it was young, specifically, the skull bones are not completely fused, relatively large orbits, and a short snout. Sereno et al. (1993), supported the notion that Eoraptor was an adult specimen based on the closure of sutures in the vertebral column, and the partial fusion of the scapulocoracoid.

During the Late Triassic Period, the Ischigualasto Formation was a volcanically active floodplain covered by forests, with a warm and humid climate, though subject to seasonal variations including strong rainfalls. Vegetation consisted of ferns, horsetails, and giant conifers, which formed highland forests along the banks of rivers. Herrerasaurus remains appear to have been the most common among the carnivores of the Ischigualasto Formation. Sereno (1993) noted that Eoraptor was found in "close association" with therapsids, rauisuchians like Saurosuchus, the dinosaurs Herrerasaurus, and the silesaurid Pisanosaurus, all of whom lived in its paleoenvironment. Herbivores were represented by rhynchosaurs such as Hyperodapedon (a beaked reptile); aetosaurs (spiny armored reptiles); cynodonts like Probelesodon, kannemeyeriid dicynodonts (stocky, front-heavy beaked quadrupedal animals) such as Ischigualastia; and traversodontids (somewhat similar in overall form to dicynodonts, but lacking beaks) such as Exaeretodon. These non-dinosaurian herbivores were much more abundant than early dinosaurs. Dinosaur fossils, including those of Eoraptor only represent approximately 6% of the total sample that has been recovered from the Ischigualasto Formation (Rogers et al., 1993), which suggests that dinosaurs were less numerous than other tetrapods.

Eoraptor was a small dinosaur and probably only hunted insects, small invertebrates, small vertebrates, early cynodonts such as Probelesodon and also some plants. It lived in South America at the Triassic period and was probably very vulnerable to other land predators. 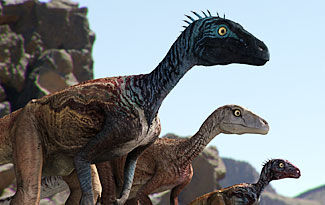 In Dinosaur Revolution, a young male Eoraptor pecks at a Ischigualastia before a Saurosuchus attacks them and drives them away, while wounding the Ischigualastia. The male then prepares for mating season. The females meet the males and they attempt to mate, the males build sand mounds to impress the females. The male tries to copy the sand mounds that the other males built, but his was sloppy. He used rocks instead of sand. One female approaches the male and is impressed by his creativity, but the sand mound wasn't sturdy enough and it falls over. She loses interest and walks away. He desperately calls for her to come back, but the Saurosuchus returns and knocks the female unconscious, waking up a few seconds later. She then realized that the Saurosuchus was right behind her and followed the male Eoraptor into a cynodont's underground home. The Saurosuchus tried to make the hole larger by stomping on it so it can reach the Eoraptors. There, a cynodont attacks the male, but the male kicks it out of the burrow and into the Saurosuchus's mouth. Then they escape back into the outside world. After the male and female mate, they have eggs, but some Probelesodon come and attack the eggs, killing all but one as the female kills one and proceeds to finish off the others. A baby Eoraptor gets out of the nest and into danger, falling down and is almost attacked by another Probelesodon, but the male throws and kills it. The male Eoraptor calls for his mate, and the female returns. The family find the same Ischigualastia that the Saurosuchus killed, and the baby investigates, but the Saurosuchus was right behind the carcass and it chases the Eoraptors, but tumbles down the rocky hill with the baby Eoraptor. It falls down and the parents watch as the Saurosuchus gets back up, but just as he is about to attack the baby, a trio of Ischigualastia appear and kill the Saurosuchus, the hatchling Eoraptor ending up under the Saurosuchus's neck flab. He survives and regroups with its parents.