Rhamphorhynchus was a pterosaur. It is also Broken Jaw's companion. Near the episode's end, the pterosaur flies away to find food and water, along with the herd of Dinheirosaurus and Lusotitan (these that could be other species of brachiosaur sauropods).

Contrary to a 1927 report by pterosaur researcher Ferdinand Broili, Rhamphorhynchus lacked any bony or soft tissue crest, as seen in several species of contemporary small pterodactyloid pterosaurs. Broili claimed to have found a two millimeter tall crest made of thin bone that ran much of the skull's length in one Rhamphorhynchus specimen, evidenced by an impression in the surrounding rock and a few small fragments of the crest itself. However, subsequent examination of this specimen by Wellnhofer in 1975 and Bennett in 2002 using both visible and ultraviolet light found no trace of a crest; both concluded that Broili was mistaken. The supposed crest, they concluded, was simply an artifact of preservation.

The classification and taxonomy of Rhamphorhynchus, like many pterosaur species known since the Victorian era, is complex, with a long history of reclassification under a variety of names, often for the same specimens.

The first named specimen of Rhamphorhynchus was brought to the attention of Samuel Thomas von Soemmerring by the collector Georg Graf zu Münster in 1825. von Soermmerring concluded that it belonged to an ancient bird. When further preparation uncovered teeth, Graf zu Münster sent a cast to Professor Georg August Goldfuss, who recognised it as a pterosaur. Like most pterosaurs described in the mid 19th century, Rhamphorhynchuswas originally considered to be a species of Pterodactylus. However, at the time, many scientists incorrectly considered Ornithocephalus to be the valid name for Pterodactylus. This specimen of Rhamphorhynchus was therefore originally named Ornithocephalus Münsteri. This was first mentioned in 1830 by Graf zu Münster himself.

owever, the description making the name valid was given by Goldfuss in an 1831 follow-up to Münster's short paper.[6] Note that the ICZN later ruled that non-standard Latin characters, such as ü, would not be allowed in scientific names, and the spelling münsteri was emended to muensteri by Richard Lydekker in 1888.

In 1995, pterosaur researcher Chris Bennett published an extensive review of the currently recognized German species. Bennett concluded that all the supposedly distinct German species were actually different year-classes of a single species, R. muensteri, representing distinct age groups, with the smaller species being juveniles and the larger adults. Bennett's paper did not cover the British and African species, though he suggested that these should be considered indeterminate members of the family Rhamphorhynchidae and not necessarily species of Rhamphorhynchus itself. Despite the reduction of the genus to a single species, the type species remains R. longicaudus. 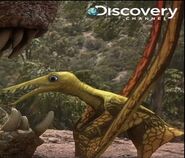 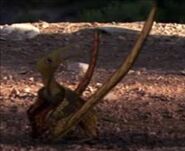 Add a photo to this gallery
Retrieved from "https://dinosaurrevolution.fandom.com/wiki/Rhamphorhynchus?oldid=24853"
Community content is available under CC-BY-SA unless otherwise noted.