Sinraptor was a species in the Metriacanthosauridae family that lived in China. Sinraptors (probably really some other kind of early carnosaur like Gasosaurus) are featured in the third episode "Survival Tactics" where they had to fight a Shunosaurus named Shroomo (who had just eaten poisonous mushrooms) and the blue male fell with the sauropod, getting his skull crushed. The duller-colored female left before the sauropod woke up after being whacked in the face by the tail club.

The Sinraptor were about over 2 meters tall (6 feet tall), 7.62 meters long (25 feet long), and weighs about around 907 kilograms (1 ton). In the show, the male Sinraptor is a blueish violet color while the female is a pale color with brown scales. 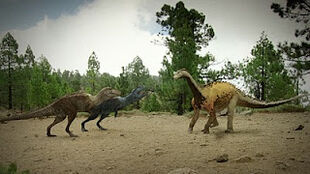 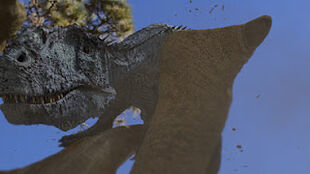 This is in survival tactics.