The episode begins with a Turtle that crawls on the floor before being picked up by a Utahraptor missing his left eye. The raptor can't break into the shell however, so it throws it away. A herd of Cedarosaurus is on their seasonal migration for food and water but are attacked by a pack of Utahraptors. The raptors gang up on a youngster but another pack appears that belongs to the one eyed Utahraptor, which attacks the first pack in an attempt to steal the kill. The two packs are so busy fighting that they do not notice the youngster getting away. It gets worst for the youngster when a Crocodile strikes, grabbing the youngster in the leg. The cries make the raptors stop fighting and target the youngster again while also scaring away the crocodile. Suddenly, the herd comes and scares the raptors away, saving their baby before walking off on there migration. The one eyed Utahraptor is thrown in the water and tries to swim up, but it is eaten by a crocodile.

The episode cuts to Madagascar 70 million years ago. A female Rahonavis can mimic the sounds of other animals, like a modern day Mockingbird. She attracts a giant male sauropod called Rapetosaurus , which is its ticket to lunch. It the Rapetosaurus eat watermelons. Suddenly a female Majungasaurus comes and the raptor just barely escapes. The abelisaur focuses on the Rapetosaurus, but while the two fight the raptor comes face-to-face with baby Majungasaurs. The babies may not sound dangerous, but they are to Rahonavis, and quickly the raptor runs toward a tree and escapes. It hears the call of another animal and mimics to attract the animal. Suddenly, a giant tongue shoots out taking one of the babies. The culprit was a giant female Beelzebufo . It eats one of the female babies. The brother runs for its life but is eaten by another female frog. Then a herd of Rapetosaurus arrives, crushing one of the frogs and killing a baby majungasaurus while the other hops away. The Raptor gets a free "taxi ride" and sees its world, including the crushed Beelzebufo and the Majungasaurus eating its kill.

The episode cuts to 160 million years ago china. A young male Shunosaurus named Shroomo is the youngest in the herd. He sees red and white mushrooms and a curious Shroomo eats two of them. He does not realize he has eaten the wrong kind of mushrooms and hallucinates in the process. It gets even worse when the herd and Shroomo’s mother abandons him to a pair of Sinraptors . He runs from the carnivores but the pair follows. His club gets stuck on a rock hill and the Sinraptors attack him. Suddenly his club breaks free and knocks one Sinraptor off, and Shroomo tumbles down the cliff with the other. When he wakes up he sees the dead female Sinraptor that she crushed when falling down the hill, and, satisfied, he walks away. His hallucination has ended. He rejoins the herd and sees the red mushrooms but he knows not to eat them.

The episode cuts to late Jurassic china, a land of forests, rivers, and crowned dragons called Guanlong. It is hard to imagine they are related to Tyrannosaurus Rex, but they are. The two Guanlongs are always fighting. Meanwhile, a small mammal called Castorocauda chases a flopping fish while the two male and female Guanlongs fight over a lizard. The beaver-like creature is noticed by the two and instead of eating the lizard they chase the mammal. It is small and agile. One of them corners it in a log but the mammal has a secret. It has stingy spray! It defeats one dinosaur, and when the other curious one comes to the log it too gets sprayed. The two areas much pain that they accidentally knock the log and the mammal in the water. However, there is a fish in the log so the mammal eats its prize. Under the Jurassic moon another mammal is on the hunt, Volaticotherium . It hunts insects on the wing, and its scent attracts the two Guanlongs. They run on a rock in the water hoping for the mammal to glide into its mouth but ends up only on the head of one Guanlong. Their calls and fighting wakes up the rock, which is not in fact a rock, but a giant Mamenchisaurus. They were just standing on the back of a giant sauropod. The two Guanlongs are too busy fighting that the small mammal escapes. The dinosaurs run off of the sauropod and onto a real rock while the sauropod walks into the forest while the two run on to a lakebed but start screaming because they find out that there are crocodyloforms.

The episode cuts to Mongolia 75 million years ago. A lone bull Protoceratops sees circling Azdarchids. He looks off a cliff edge and sees a family of Protoceratops fighting Velociraptors. One of the Raptors is eating the father Protoceratops while the other is trying to kill the mother, who is defending her baby. The raptor stabs the mom in the neck with its "killing claw" and the baby sees his mother fall. The raptors also want to kill the baby so they chase it into a cave. Suddenly the lone bull appears and fights the raptors. Even though he gets injured he throws one raptor by the tail and scares them away. The baby sees his parents now getting eaten by the Azdarchids. Since it sees its parents dead, it decides to stick with the old bull even though he has to walk behind the bull. In the night the baby tries to sleep with the bull but he rejects it. As they continue their journey the baby gets some fresh greens by standing on the back of the bull. As they continue they are being followed by the two Velociraptors. Just as the raptors are about to make the kill a whole herd of Protoceratops comes and scares them away. The baby decides to rejoin it's herd. but the old bull cannot. In the evening the Azdarchids are circling again and the lone bull sees a "Protoceratops graveyard" where slowly dies.

The episode cuts to Brazil 25 million years ago. While dinosaurs ruled the land, another group of reptiles ruled the air. These flying reptiles are called pterosaurs. A mother Anhanguera brings fish to her nest, and the hungry chicks fight for it but to their shock the mother eats it herself. It is time for the chicks to learn how to fly, and the first one is off to a good start until he does not look where it's going and crashes into a cliff and cracks it's skull. The second one is also off to a good start but he is eaten by another Anhanguera. The last one see's a crocodyloform and tries to escape but her mother throws her off. On the ground she sees her brother getting eaten by Crabs . She spots one young crab and the crab pinches him. For revenge she tries to kill the crab but does not have much luck. Suddenly she has to run for her life when a Crocodyloform starts to chase her. The crocodile chases the pterosaur, eventually chasing the baby into another crocodile. Luckily she begins to fly, and the two crocodiles crash into one another. The young pterosaur also also kills the crab. Her mother calls for her to come back and to her surprise when she does she is eating a crab. The mother throws her out again after the chick shakes drool onto her. 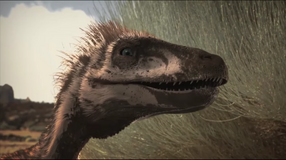 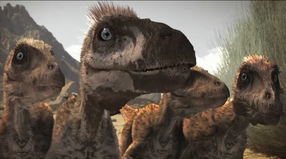 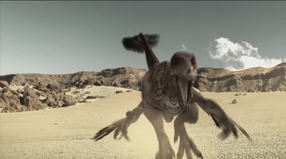 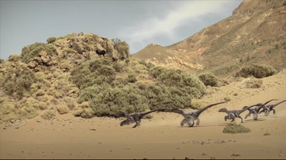 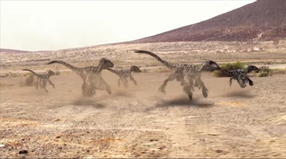 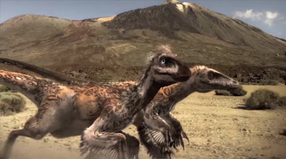 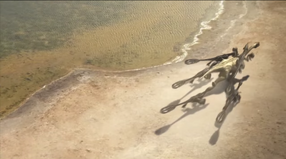 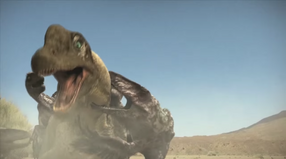 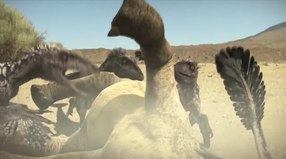 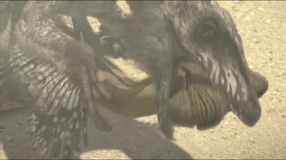 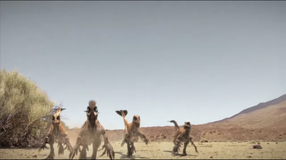 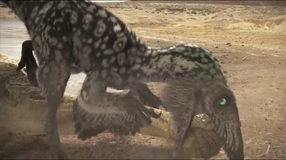 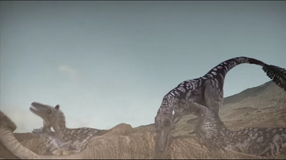 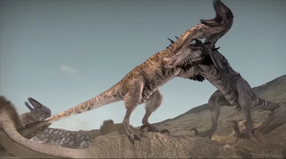 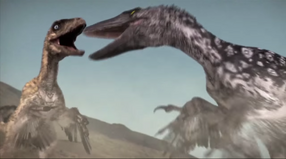 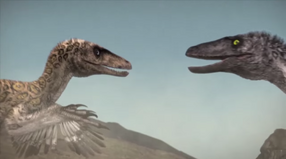 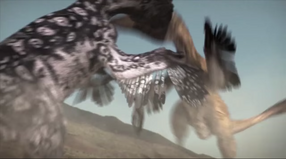 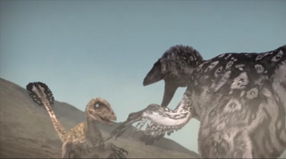 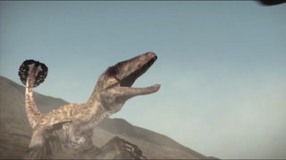 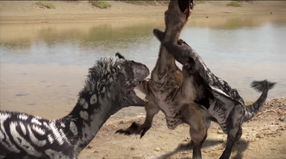 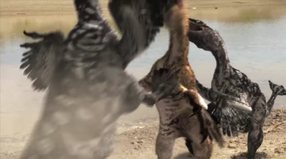 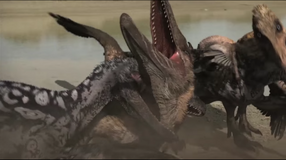 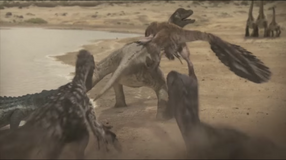 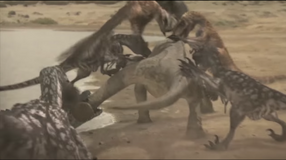 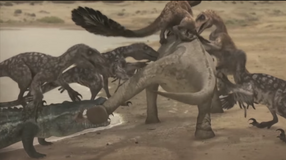 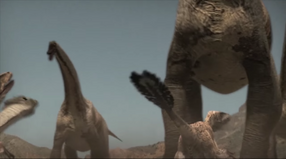 Add a photo to this gallery
Retrieved from "https://dinosaurrevolution.fandom.com/wiki/Survival_Tactics?oldid=21296"
Community content is available under CC-BY-SA unless otherwise noted.